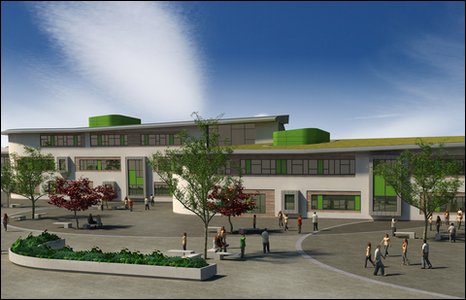 Foyle College is a split-site school. The two campuses are at Springtown, Northland Road (which houses the junior school (ages 11–14), and Duncreggan (housing the senior school (ages 14–18)). As a grammar school it admits pupils based on academic selection. The school joined the Association for Quality Education (AQE)] which requires prospective pupils to take the AQE Common Entrance exam in order to be admitted to the college from 2010.

All the core subjects, as well as a number of options, are offered up until the end of Key Stage 3 at the Springtown campus. Pupils then transfer to Duncreggan and sit GCSEs. With suitable grades, pupils have the option to study AS and A2 levels in the Sixth Form.

The official religious affiliation of the school is non-denominational.The school is preparing to leave its current locations at Northland Road and Duncreggan Road to move to a purpose built school in the Waterside suburb of Londonderry in the near future.

*Image above is an artists impression of the future Foyle College